1. The Fox and The Grapes

Once there was a hungry fox who stumbled upon a vineyard. After seeing the round, juicy grapes hanging in a bunch, the fox drooled. But no matter how high he jumped, he couldn’t reach for it. So he told himself that it was probably sour and left. That night, he had to sleep on an empty stomach.

Moral of the Story:
Most of us have the tendency to act like the fox. When we want something but think it’s too hard to attain, we make up excuses. We tell ourselves that it’s probably not that great instead of working hard for it.

2. The Ant and The Grasshopper

The ant and the grasshopper were good friends. In the summer, the ant works hard to fill his storage with food. While the grasshopper was enjoying the fine weather and playing all day. When winter came, the ant was lying cozily in his home surrounded by the food he stored during the summer. While the grasshopper was in his home, hungry and freezing. He asked the ant for food and the ant gave him some. But it wasn’t enough to last the entire winter. When he tried to ask the ant again, the latter replied: “I’m sorry my friend but my food is just enough for my family to last until the end of winter. If I give you more, we too will starve. We had the entire summer to prepare for the winter but you chose to play instead.”

Moral of the story:
Winter, in this story, represents a time in our life where food and resources are scarce. While summer is that time where everything is abundant. So if you have a lot right now, save some of it for the winter. 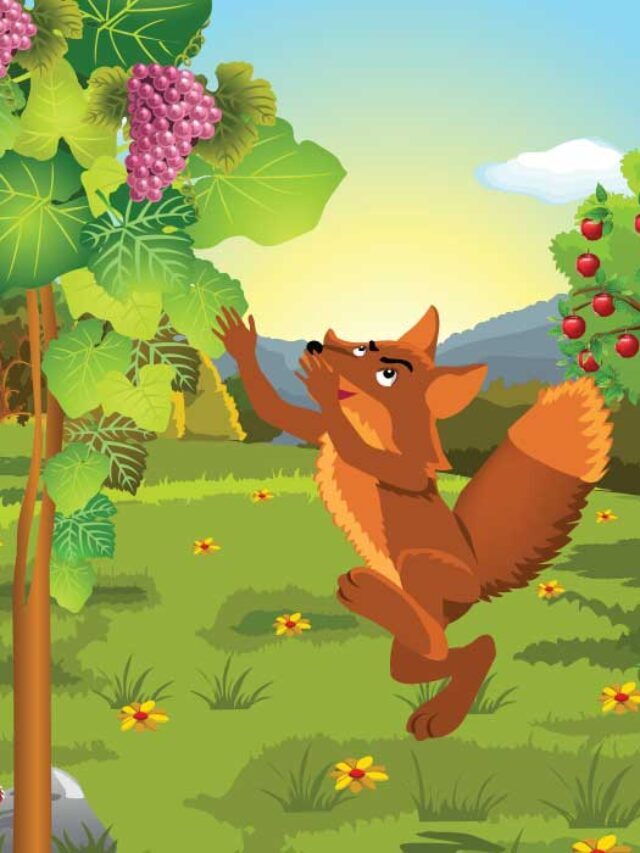 3. The Boy Who Cried Wolf

Once upon a time, there was a boy who had a duty to look after a flock of sheep. The used to lie for his fun.
One day he started shouting, “Wolf, Wolf, Wolf”, on hearing this villager ran towards him for his help.
But when the villagers reached he was laughing on them as there was no wolf.
He was lying and making a fool out of the villagers. This continued for some days.
And finally, one day, a wolf really came and shouted again, nobody came and as a result, the boy was killed by the wolf.
There was no one to blame but him.

Moral: Never lie, no matter how bad the situation is.

4. The Ant and The Grasshopper Story

Once on a bright summer’s sunny day, a Grasshopper was singing then he saw an Ant working hard to collect food, the grasshopper said, “Why do you work so hard in summers? Summers are for fun, relaxation and enjoyment. Come let us sing and enjoy”.

But Ant said, “I am collecting food for the winters and I recommend you to do the same.”

Grasshopper said, “We have got plenty of food at present. Why bother about winter now?”.

The Ant ignored him and went on its way.

When the winter came grasshopper had no food to eat.

He saw that Ant and begged for food, but she said, “When I worked hard, you enjoyed”.

Then grasshopper learned his lesson the hard way.

Moral: Work hard so you can get the benefits tomorrow.

There was a stray dog in a village. That dog used to sit outside a school in the village.

A boy studying in the fifth standard used to feed both the pieces of bread of his tiffin to that dog.

He was doing this for the last five months. One day some boys of his class started beating him outside the school.

As soon as the dog saw the incident, he ran fast. Seeing the dog coming near to them, all the boys ran away.

The boy hugs the dog and thanks to him.

Moral:- The story teaches us that true friendship is very pleasant.

6. A woodcutter with his friends

A woodcutter was cutting wood in the forest. There was a tree nearby which was very precious, so he asked his friends to cut it down, but they decided to cut it the next day.

Some children of a bird were listening to them on the same tree and narrated the whole story to their mother.

But, the mother said that nothing would happen.

The next morning, the mother flew away in search of food. When she returned, she saw that the tree was cut down and her children were dead.

She felt very sorry for her children.

Moral: The moral of the story is that if we feel something unpleasant, we should take action immediately rather than avoid it.

A wise man used to give advice to anyone who approached him. Over the years, he noticed that people had been complaining about the same problems to him.

One day, he told a joke, which made everyone laugh out loud.

He told them the same joke after a few minutes, and only a few of them smiled.

The third time he told the same joke, no one laughed.

He smiled and said, “You can’t laugh at the same joke over and over. So why are you always crying about the same problem?”

Moral of the story: You won’t solve your problems if you worry; you’ll just waste your time and energy.

Mysterious deaths were constantly occurring at a hospital in Cape Town, South Africa. The nurses found the patients who were hospitalized in intensive care room 311 every Friday for weeks in a row. These glazed deaths could not be explained for a long time. Everyone was mobilized to resolve the issue. Experts checked the air of the room bacteriologically. South Africa’s leading scientists interviewed the families of the deceased for three weeks.

In fact, the police got involved and every possibility that came to mind was evaluated one by one, but their research was also inconclusive. As a last resort, the intensive care room number 311, where the patients remained, was under constant surveillance and eventually the cause of the deaths in the room emerged. The result was very tragicomic. It was observed that the cleaning woman who cleaned the rooms at 6 am on Friday morning unplugged the respiratory device to which the patient was connected, plugged her own vacuum cleaner and, after finishing her work, plugged her respirator back into place.

9. The Elephant and the Ants

There was once a proud elephant who always bullied smaller animals. He would go to the anthill near his home and spray water at the ants. The ants, with their size, could do nothing but cry. The elephant just laughed and threatened the ants that he would crush them to death. One day, the ants had enough and decided to teach the elephant a lesson. They went straight into the elephant’s trunk and started biting him. The elephant could only howl in pain. He realized his mistake and apologized to the ants and all the animals he bullied.

Moral of the story: Be humble and treat everyone with kindness. If you think you’re stronger than others, then use your strength to protect them instead of harming them.

After flying a long distance, a thirsty crow was wandering the forest in search of water. Finally, he saw a pot half-filled with water. He tried to drink from it but his beak wasn’t long enough to reach the water inside. He then saw pebbles on the ground and one by one, he put them in the pot until the water rose to the brim. The crow then hastily drank from it and quenched his thirst.

Moral of the story: If there’s a will, there’s a way. Every problem has a solution if we just look hard enough and don’t give up.